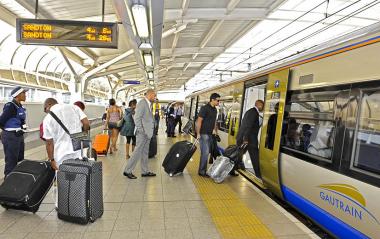 A proposed expansion to the Gautrain Rapid Rail Link Network will see new stations being built in areas such as Boksburg, Roodepoort, Mamelodi, Irene and Lanseria Airport.

In 2017, the Gautrain Management Agency (GMA) announced that it would be conducting a feasibility study into the expansion of the network, with 12 new train sets also required.

“The feasibility study concludes that the extension of the Gautrain rail network will provide significant economic and transport related benefits to the province and the country at large; that it offers value for money, and appropriate risk transfer if procured as a public-private partnership,” it said.

It added that through its modelling process, it became clear that the ‘cost of doing nothing’ in the province will lead to major road congestion in 2037 – at which stage cars will travel at an average of 15 kilometres an hour due to doubling of car growth.

GMA senior executive manager for communication and marketing, Dr Barbara Jensen, said that the GMA has now completed the feasibility study and submitted it to the National Treasury for approval.

“Once approval has been granted the planning and Environmental Impact Assessment of Phase 1 will begin,” she said.

Among others, the expansion will include new stations in; Boksburg, The East Rand Mall, Irene, Mamelodi, Sunninghill, Fourways, Roodepoort aand Lanseri.

The below map shows the current station layout as of May 2019:

The below map – provided by the GMA – shows what the Gautrain’s routes could look like after all of the planned new stations have been included:

As lockdowns ease, how have global property markets fared?

As the Covid-19 pandemic sent much of the world into lockdown, significantly negatively impacting the world economy, global real estate activity slowed dramatically. Now the majority of countries around the world are loosening restrictions, with many people returning to the workplace. But how have property markets responded? Citing Savills Global Market Sentiment Survey, Dr Andrew […]