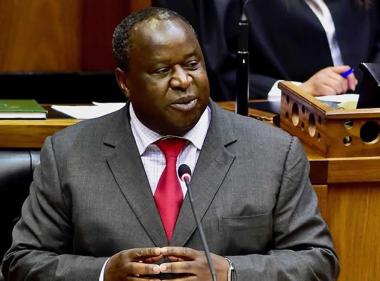 Minister Mboweni detailed the medium-term budget policy statement (MTBPS), with the budget deficit set to be 2% points higher on average over the next three years than forecast just eight months ago.

It has taken on added significance as economic growth has disappointed and the government has increased spending on parastatals, notably power utility Eskom, while the SA Revenue Service struggles to achieve tax collection targets thanks to poor growth and a legacy of governance problems.

The debt-to-GDP ratio is now forecast to balloon to 71.3% over the three-year MTBPS period. An indication of how rapidly the country’s public finances are deteriorating is shown that the 2019 budget projected this to be 59.7%.

Expressed in numbers rather than percentages, this is how Mboweni put it: “This year the national debt exceeded R3-trillion. It is expected to rise to R4.5-trillion in the next three years.

“Clearly, we need to do things differently… this is a serious position to be in.”

The key highlights of the budget are listed below:

There was also reduced profitability in a difficult trading environment, resulting in lower-than-expected corporate income tax collections; weak household consumption, which moderates the increase in domestic VAT collection, and large downward revisions to tax revenue over the medium term

Economic growth has slowed down

Economic growth is now projected at 0.5% for 2019, as long-term growth estimates have fallen. As a result, revenue projections have been sharply reduced.

“Spending pressures continue to mount, led by the public service wage bill and state-owned companies in crisis. The 2019 MTBPS proposes an approach over the medium term that, effectively implemented, will restore the momentum of economic growth and stabilise the public finances,” the minister said.

The current account deficit is expected to remain at 3.5% of GDP over the next three years, reflecting low import growth due to weaker domestic demand.

Nearly half of all projected spending is going to social grants, education and healthcare

Over the next three years, consolidated spending will total R6.3 trillion, with 48% of this amount going towards social grants, education and health.

The consolidated budget deficit averages 6.2 per cent of GDP over the next three years. Debt and debt-service costs will continue to increase, with the debt-to-GDP ratio now estimated at 71.3 per cent in 2022/23.

The deficit is expected to widen substantially over the next three years relative to 2019 Budget estimates. Debt and debt-service costs will continue to increase.

Government has clawed back some of the revenue shortfall through reductions to departmental baselines and slower spending growth in 2022/23. Alone, these reductions are insufficient.

“Additional measures, particularly on the wage bill, will be required to stabilise the debt outlook and improve the composition of spending. Tax measures are also being considered,” Mboweni said.

In August 2019, the paper released by the National Treasury outlined short- and medium-term reforms that can boost economic growth, many of which do not require significant state resources.

Interventions to improve the quality of infrastructure planning are beginning to show some results, National Treasury said. Further measures to reduce wasteful expenditure, including by limiting claims against the state, will be implemented in the coming year.

Government is providing medium-term support to Eskom to secure energy supply and to honour the state’s contractual obligations.

“The National Treasury, in partnership with the Department of Public Enterprises, is instituting a series of measures to bring discipline to the utility’s finances, and to step up the timeline for restructuring. Debt relief will only be considered once operational efficiencies have been achieved,” it said.

“Government has announced a comprehensive set of structural reforms for Eskom and the energy sector, which we are supporting with R230 billion over the next 10 years. Very difficult budget adjustments have been made,” Mboweni said.

“We cannot continue to throw money at Eskom.”

For the sizeable support required, it cannot be business as usual, the minister said, adding that Eskom must run its current plant and equipment better, achieve other operational efficiencies, including much better cash management, and fast-track the separation of the utility into three parts.

E-tolls are here to stay

Mboweni said that cabinet has considered several options to resolve the impasse over the Gauteng Freeway Improvement Project, but maintained that the user-pays principle is being carried forward.

“The reconfigured approach to Gauteng Freeway Improvement Project and its financing will be determined by the Ministers of Finance and Transport after consultation with the Premier of Gauteng and his Executive council.

“We need to build a culture of payment, as government services can only be sustainable if all of us that can pay for services, do so,” Mboweni said.

No new information about the NHI

The minister said that Treasury and the health department are still in discussions around National Health Insurance, and that parliament is still considering the NHI Bill.

The rollout of the NHI will require an addition R33 billion annually from the 2025/26 financial year, Treasury said.

This would be in addition to the previous estimations contained in the Green and White Papers of 2011 and 2017 respectively, of R74 billion a year.