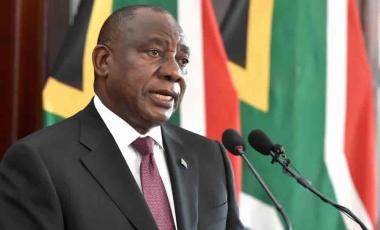 President Cyril Ramaphosa, on Thursday, delivered the 2021 State of the Nation Address (SONA) as he faces the tough task of tackling economic recovery, corruption, electricity shortages, and Covid-19 pandemic issues.

A humble 2021 State of the Nation (Sona) address took place on Thursday evening as President Cyril Ramaphosa discusses the country’s present and future in the midst of a devastating pandemic.

The government intended to start providing shots developed by AstraZeneca Plc and the University of Oxford to health-care workers this month. Its plans were thrown into disarray this week when a study showed the vaccine had little impact on mild infections caused by a variant of the virus first identified in South Africa.

Ramaphosa noted the findings of Astra-Zeneca’s low efficacy against the 501-Y variant prevalent in South Africa and applauded our scientists for their research.

“We have secured 9 million doses of the Johnson & Johnson vaccine. The first batch, of 80,000 doses, will arrive in the country next week. The success of the vaccination programme will rely on active collaboration between all sectors of society,” Ramaphosa said.

A further 12 million jabs will be supplied by COVAX, and Pfizer are set to give us 20 million doses. These two inoculations will start arriving in this country from March onwards.

“We are greatly encouraged by the active involvement of business, labour, the health industry and medical schemes in particular, in preparing for this mass vaccination drive,” he added.

The President also said we have decided to extend the period for the Special COVID-19 Grant of R350 by a further three months.

The central bank estimates that Africa’s most-industrialized economy shrank 7.1% in 2020 because of the pandemic and accompanying lockdowns. Ramaphosa unveiled a recovery plan in October last year that targets an average annual economic growth rate of 3% over the next decade, and focuses on job creation and increased infrastructure investment.

In his speech, Ramaphosa said a priority intervention of the Recovery Plan is to support a massive increase in local production and to make South African exports globally competitive.

“They have identified 42 products – ranging from edible oils to furniture, fruit concentrates, personal protective equipment, steel products and green economy inputs – that can be sourced locally.”

“If we achieve our target, we will significantly expand our productive economy, potentially returning more than R200 billion to the country’s annual output.”

Last year, we undertook to create a larger market for small businesses and designate 1,000 locally produced products that must be procured from SMMEs, said Ramaphosa.

“Through the implementation of the poultry master plan, the industry has invested R800 million to upgrade production. South Africa now produces an additional one million chickens every week.

“The sugar master plan was signed during the lockdown, with a commitment from large users of sugar to procure at least 80% of their sugar needs from local growers.”

South Africa has been plagued by rolling blackouts since 2005 because state power utility Eskom Holdings SOC Ltd. has been unable to meet demand for electricity from its old, poorly maintained plants.

Power utility Eskom estimates that, without additional capacity, there will be an electricity supply shortfall of between 4,000 and 6,000 megawatts over the next five years, as old coal-fired power stations reach their end of life.

To address this shortfall, Ramaphosa said that government will in the coming weeks issue a request for proposals for 2,600 megawatts from wind and solar energy as part of a bid window.

He said restoring Eskom to operational and financial health and accelerating its restructuring process is central to this objective. Eskom has been restructured into three separate entities for generation, transmission and distribution.

“Over the last year, we have taken action to urgently and substantially increase generation capacity in addition to what Eskom generates.”

“Eskom has already started work to expedite its commercial and technical processes to allow this additional capacity onto the grid without undue delay.”

The Department of Mineral Resources and Energy will also soon be announcing the successful bids for 2,000 megawatts of emergency power. In the coming weeks a request for proposals for 2,600 megawatts from wind and solar energy as part of Bid Window 5 will be issued, followed by another bid window in August 2021.

Eskom will be looking to partner with investors to repurpose and repower part of its coal fleet, Ramaphosa said.

The President announced that government is currently ‘conceptualising’ a number of post-apartheid smart cities in provinces around the country. He said that these infrastructure projects form a key part of the government’s Covid-19 recovery plan.

Lanseria Smart City, will become the first new city to be built in a democratic South Africa.

“The draft masterplan for this smart city – which will become home to between 350,000 to 500,000 people within the next decade – was completed in November 2020 and is now out for public comment.”

“In the State of the Nation Address last year, I said that our vision for industrialisation is underpinned by sector master plans to rejuvenate and grow key industries.

President Ramaphosa says we have launched “two major human settlements projects that will provide homes to almost 68 000 households in the Gauteng province”, since the announcement of the Reconstruction and Recovery Plan.

Ramaphosa added that government’s R100 billion infrastructure fund is now in operation and that the country has billions of rands in planned infrastructure development, including upgraded highways.

“We have now developed an infrastructure investment project pipeline worth R340 billion in network industries such as energy, water, transport and telecommunications,” he said.

“This includes the rehabilitation of the N1, N2 and N3 highways, the student housing infrastructure programme, and the Mokolo and Crocodile River water project.”

During the course of the next financial year, government will establish a Land and Agrarian Reform Agency to fast-track land reform.

To date, government has redistributed over 5 million hectares of land, totalling around 5,500 farms, to more than 300,000 beneficiaries. This is in addition to the land restitution process, which has benefited over two million land claimants and resulted in the transfer of around 2.7 million hectares.

Ramaphosa said an the intervention of an employment stimulus to create jobs and support livelihoods was one of four of his government’s priority interventions.

“Over the past year, South Africa has experienced a sharp decline in growth and a significant increase in unemployment. Poverty is on the rise. Inequality is deepening. In the third quarter of 2020, our economy was 6% percent smaller than it was in the last quarter of 2019. There were 1.7 million fewer people employed in the third quarter of 2020 than there were in the first quarter, before the pandemic struck. Our unemployment rate now stands at a staggering 30.8%,”

“The Presidential Employment Stimulus is one of the most significant expansions of public and social employment in South Africa’s history. By the end of January 2021, over 430 000 opportunities have already been supported through the stimulus. A further 180 000 opportunities are currently in the recruitment process. These opportunities are in areas like education, arts and culture, global business services, early childhood development, and small-scale and subsistence farming,” Ramaphosa said.

He announced that the National Youth Development Agency and Department of Small Business Development would provide grant funding and business support to 1 000 young entrepreneurs within 100 days.

“While the programme had to be put on hold due to the coronavirus restrictions, it nevertheless managed to reach its target of 1 000 businesses by International Youth Day on August, 12, 2020. This provides a firm foundation for our efforts to support 15,000 start-ups by 2024,” he said.

Ramaphosa was frank in his assessment of corruption among government officials.

“Corruption is one of the greatest impediments to the country’s growth and development,” Ramaphosa said.

“The revelations from the Zondo Commission of Inquiry lay bare the extent of state capture and related corruption.Testimony at the Commission has shown how the criminal justice system was compromised and weakened.”

“We will shortly be appointing the members of the National Anti-Corruption Advisory Council, which is a multi-sectoral body that will oversee the initial implementation of the strategy and the establishment of an independent statutory anti-corruption body that reports to Parliament,” he said.