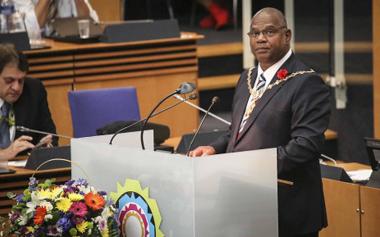 The Cape Town council has approved a budget of just over R50 billion for the 2019/2020 financial year.

“There’s something for everyone in the budget, housing for instance. Over R800 million for new housing and informal settlement upgrades has been budget for,” Plato said.

Over the next three years, almost R2.7 billion will go towards human settlement upgrades in the metro, the council said.

With the emphasis on improving public transport, R2.9 billion will be spent on transport upgrades over the same period. About R535 million has been earmarked for the safety and security directorate.

The budget was presented and discussed at 27 public meetings across the City of Cape Town and over 4,000 Capetonians gave input.

Since the tabling of the draft budget in March, further analysis has indicated that the City’s cash flow status is stronger than was assumed at the time. This has enabled a number of additional short-term needs to be met, while also enabling a reduction in the borrowing requirements that were set out in the draft Budget.

The operating budget expenditure is now set at R41,8 billion and the capital budget at R8,3 billion, giving an overall expenditure budget of R50,1 billion.

The revenue budget has been contained to R40,9 billion, which is a 4% increase on the previous year’s budget and below the Consumer Price Index, despite the considerable cost pressures on the City.

The borrowing requirement for the three-year budget has been halved from the R14,5 billion that was tabled in March to R7 billion, due to the favourable cash flow projections.

Service charges at a glance: