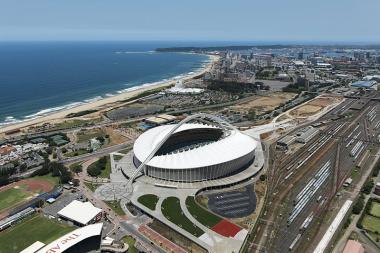 The decision taken by Group Five, one of South Africa’s construction giant which built the Moses Mabhida stadium, to file for bankruptcy protection, has come as a shock to the nation

The decision taken by Group Five, one of SA’s construction giant which built the Moses Mabhida stadium, to file for bankruptcy protection, has come as a shock to the nation as the sector may be collapsing.

After 45 years of trading on the JSE, Group Five’s stock was suspended on on Tuesday 12 March after the company filed for bankruptcy protection, making it the fifth local builder to enter business rescue in less than a year. From a peak market value of R8.2bn in 2007, it was worth less than R100m when the shares stopped trading.

But the proximate cause is, in fact, nothing to do with SA; it was a Ghanaian power project, Cenpower Generation, which became a disaster for the group.

After the project collapsed, the company claimed on a $62.7-million guarantee for the failure to complete the project which decimated Group Five’s cash flow, always a tricky problem for construction companies to manage.

But it’s not as though Group Five would definitely have survived were it not for this one disastrous project; the whole listed construction sector has been under huge pressure for the past three years. One of Group Five’s biggest rivals, Aveng, is presently trading at bankruptcy levels.

The contractor and a number of its peers, including Basil Read and Erbacon, have succumbed to a depressed construction market in which major projects have failed to materialise owing to the state’s strained finances.

While the construction industry is notoriously cyclical, the current mix of a depressed SA economy, high levels of national debt and low infrastructure spending is proving toxic as contracts dry up. At risk are thousands of jobs including 8,000 at Group Five alone — in a country with an unemployment rate of more than 27%.

“Those construction companies that are SA-orientated have gone from bad to worse in the past 12 months,” Marc Ter Mors, the head of equity research at Johannesburg-based SBG Securities, said. “In SA, volumes are low, pricing is under pressure and companies are taking on more risk to win contracts, so margins are thin and that hits cash flow. There are no real segments to hide in.”

Group Five’s history demonstrates the group’s resilience in “several extremely volatile markets”, the company still says on its website. Even so, it has “for some time, been experiencing cash flow difficulties”, it said on Tuesday.

Murray & Roberts (M&R) saw the writing on the wall. Having built significant SA landmarks such as the Carlton Centre, the continent’s tallest building, the company sold its building and infrastructure units in 2016 to focus on international businesses, centring on projects such as underground mining and oil and gas.

While M&R’s market valuation is a fraction of what it once was, the stock has gained 44% in the past year amid takeover interest from 40% shareholder Aton.

The industry’s woes are a far cry from the build-up to the Fifa Soccer World Cup in SA nine years ago, which required major national infrastructure spend, including on new stadiums. However, that boom was cast in a dark light even before the tournament took place, when the Competition Commission starting investigating collusion in the industry. The regulator settled with 15 firms in 2013, while Group Five was granted immunity for co-operating.

While President Cyril Ramaphosa said last month that the government’s infrastructure spending has slowed, he also said the state will contribute R100bn into a fund over 10 years. The plan is to use this to get financing from both private and state-owned entities to reboot the industry.

Aveng, which, together with M&R was among the top 40 largest companies by market value on Johannesburg’s stock exchange in 2010, has a market value of R582m, from a peak of R28bn in 2008.

Said the analyst, “As SA depletes its capacity to build its own infrastructure, when the cycle turns again, it will be forced to rely on international companies and their pricing.”