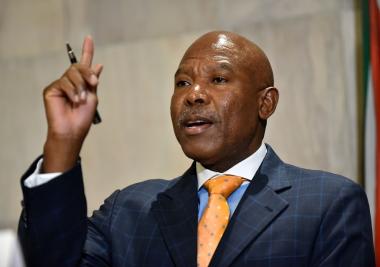 Kganyago said since the previous meeting of the Monetary Policy Committee, global growth concerns have increased, with particular weakness visible in some of our major trading partners. Domestically, electricity constraints, combined with weakness in business and consumer confidence, weigh on the forecast.

“While inflation continues to show near-term downside surprises, the medium-term outlook is impacted by higher energy tariffs and rising food and fuel prices,” he said.

The bank’s measure of core inflation, which excludes food, fuel and electricity, was unchanged in February at 4.4% for the fourth consecutive month. Producer price inflation for final manufactured goods increased to 4.7% in February from 4.1% in January.

Kganyago said that previous MPC statements have highlighted the risks to the forecast presented by volatile oil prices and food price surprises. In light of recent developments, the assumptions for Brent crude oil in the QPM were revised up by US$2 per barrel from US$62 to US$64 for 2019. The assumptions for 2020 and 2021 are unchanged at US$65.

Fuel taxes and levies announced in the 2019 Budget have been included in the forecast.

The forecast also takes into account the recent electricity tariff increases announced by the National Energy Regulator of South Africa. The assumption for electricity price inflation, which takes into account municipal price adjustments, has increased from 12% to 13% for 2019/20 and from 6% to 9% in 2020/21.

“Higher food, fuel and electricity prices are expected to lift inflation over the medium term. However, this is expected to be offset by lower core inflation as unit labour costs and inflation expectations moderate,” the governor said.

“This results from the bigger than expected slowdown in the global economy, declines in business confidence, potential supply side disruptions from load shedding and growing pressure on household disposable income,” Kganyago said.

Against this backdrop, the MPC unanimously decided to keep the repurchase rate unchanged at 6.75% per year, he said, adding that the committee continues to assess the stance of monetary policy to be accommodative.

The implied path of policy rates generated by the Quarterly Projection Model is for one hike of 25 basis points, reaching 7.0% by the end of 2019, he said.

In January this year, it was announced that the repo rate would remain at 6.75%, with the governor citing improved inflation, a stronger rand and a better growth outlook as some of the factors the institution’s Monetary Policy Committee took into account.

In November last year, the repo rate was increased by 25 basis points to 6.75%. At the time, Kganyago listed rising inflation and the weak rand as major factors.