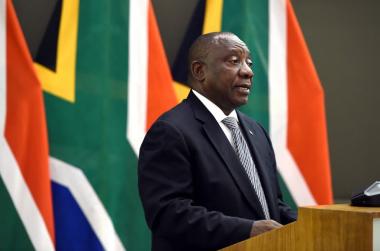 President Cyril Ramaphosa, on Sunday, eased lockdown rules to revive the economy, as the country moves to level one.

Due to declining of Covid-19 infections, lock-down rules in South Africa have been relaxed, moving to level one — President Cyril Ramaphosa announced on Sunday evening.

President Ramaphosa announced the relaxation, which will come into force from 1st of March.

Ramaphosa gave an update on the country’s response to the COVID-19 pandemic on Sunday after consultations with the National Coronavirus Command Council (NCCC), the President’s Coordinating Council (PCC) and Cabinet.

Nearly 50,000 people have died from COVID-19 countrywide since the outbreak began.

Around 1,5-million total infections have also been recorded.

“New infections, admissions to hospital and deaths have fallen significantly and continue to decline steadily.   In the week that has just passed, the country recorded just under 10,000 new infections,” he said.

“This dramatic decline in cases over eight weeks is due to a combination of the public health measures introduced, changes in behaviour and accumulating immunity in those who became infected in our communities.”

The president spoke positively about the start of the country’s vaccination campaign.

Over 67,000 frontline health care workers have been vaccinated over the past ten days.

The number of sites that will be available for vaccination will be expanded next week from 17 sites to 49 sites.

Of the 49 sites, 32 will be at public hospitals and 17 sites in private hospitals and will include sites in rural areas to improve access to rural healthcare workers.

Once the vaccination of healthcare workers has been completed, the second phase of the vaccine roll-out is anticipated to begin in late April or early May.

Phase 2 will include the elderly, essential workers, persons living or working in institutional settings and those with co-morbidities.

“We have recently signed an agreement with Johnson and Johnson to secure 11 million doses.  Of these doses, 2.8 million doses will be delivered in the second quarter and the rest spread throughout the year.”

“For this phase, we will be activating many more sites for vaccination in the public and private healthcare sector so that we can reach as many people in the shortest possible time,” he said.

The president announced that Cabinet decided to move the country from Coronavirus Alert Level 3 to Alert Level 1.

Under the new Alert Level, the following regulations will come into effect:

The hours of the national curfew will now be from 12 midnight to 4 am.

Gatherings will be permitted, subject to limitations on size, adherence to social distancing and other health protocols including religious, social, political and cultural gatherings.

The maximum number of people allowed at any gathering is 100 people indoors or 250 people outdoors.

Where the venue is too small to accommodate these numbers with appropriate social distancing, then no more than 50 per cent of the capacity of the venue may be used.

Night vigils or other gatherings before or after funerals are still not permitted.

The sale of alcohol will be permitted, according to normal licence provisions. However, no alcohol may be sold during the hours of curfew.

The wearing of masks in public places is still mandatory, and failure to wear a mask when required remains a criminal offence.

The 33 land border posts that have been closed throughout the lockdown period will remain closed, while the other 20 will remain open.

Only five airports will be open for international travel with standard infection control measures.