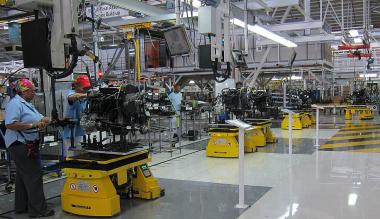 The manufacturing sector contributed most to the quarterly contraction, falling 8.8%, statistician-general Risenga Maluleke said on Tuesday.

However, activity fell in almost every sector of the economy.

“The 3.2% decline is the biggest quarterly fall in economic activity since the first quarter of 2009, when the economy – under strain from the global financial crisis – tumbled by 6.1%,” said Stats SA in a statement. 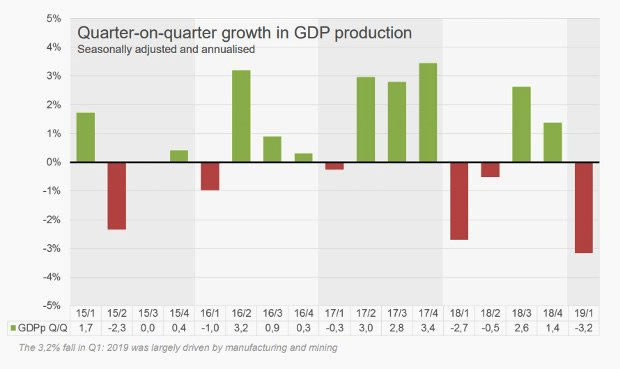 While a decrease had been predicted by analysts and the SA Reserve Bank – who flagged depressed expenditure and investment in the economy, weak consumer demand, the negative impact of load shedding and recurring falls in mining production – the number still came as a shock.

“This is the biggest decline in about a decade, or since the [2008] financial crisis,” Maluleke said.

The dismal GDP print underscores fears that a slowing global economy and lack of domestic business confidence has undercut SA’s expected economic recovery in 2019. The numbers are likely to reinforce expectations that the Reserve Bank will move to cut interest rates, possibly at its next meeting in July.

Load-shedding, slow wage growth and higher income taxes had all been factors economists had cited as reasons for depressed economic activity.

Exports fell 26.4% in the quarter, mainly due to exports of metals and vehicles, while imports fell 4.8%.

Within the household expenditure category, clothing and footwear declined 12.7%, transport 3.1% and recreation 4%.

2019-06-04
Previous Post: Delta Property Fund year end results reflect the toughest operating year in the fund’s history
Next Post: Ensuring the continuity of your business is a vital part of a good estate plan