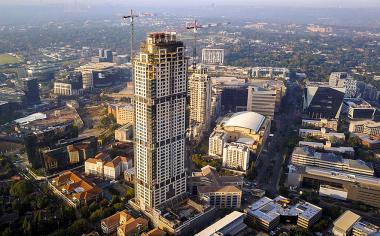 Leonardo developer, Legacy Group canceled the contract with construction group, Aveng in a dispute about delays.

The developer of the R3 billion Sandton skyscraper, the Leonardo, has shown the troubled construction company, Aveng, the exit door after terminating its contract.

The Leonardo is a mixed-use development and Africa’s tallest building, developed by the Legacy Group and Nedbank, designed to house 254 apartments, a three-floor penthouse and five floors of office space, as well as shops and restaurants.

In a dispute about delays, Aveng said on Thursday that it had received a notice terminating its role in the construction of the Leonardo, which it has been a part of since it won the contract in 2015.

But the firm says it’s not going to take this lying down, because it believes the termination is ill-conceived and is a breach of contract between it and the Leonardo owners.

“Aveng has received a notice purporting to terminate the contract for the construction of the Leonardo in Sandton from Seventy Five on Maude (Pty) Limited, which is part of Mr. Bart Dorrestein’s Legacy Group,” said Aveng in a statement published on the Stock Exchange News Service (SENS).

The company said the Leonardo owners have also called on the construction guarantee, a surety bond that Aveng put up when it signed the contract. This has put Aveng in the red by R87.4m. This will worsen an already dire situation for the company, which has lost more than 99% value of its share price in the past three years and has been recording annual losses since 2014.

The Leonardo’s record height and proximity to key areas of interest such as the Johannesburg Stock Exchange and the Sandton City has made it a highly anticipated project, but it suffered delays. Aveng said despite those delays, it does not believe it should be stripped off the contract because “responsibility and consequence” are being disputed.

Aveng’s position is that the grounds for termination relied on by the employer are incorrect, inaccurate and ill-conceived, and are accordingly denied. Furthermore, Aveng is of the view that the employer is itself in material breach of the contract, which precludes the possibility of a valid termination,” said Aveng.

Aveng, a former construction giant, is quitting the troubled local construction industry, which is a shadow of itself as a result of a lack of government infrastructure spend.

The group has sold a number of noncore assets after a review of its strategy in 2018. The sold assets include Aveng Grinaker-LTA Construction which the group sold to the black-owned Laula Consortium in 2019 for R100m.

Five disruptors commercial property should look out for in 2019

Over the past year, we have seen a plethora of disruptors influencing the world of commerce, the property market included. These trends are bringing about major chances to the way in which business was carried out in the past. Many of these trends are technology-based and particularly affect communications and finance. “The green revolution is […]

The Board of Directors of EPP N.V. has announced that it will nominate Tomasz Trzósło for appointment as CEO to succeed Hadley Dean, whose term of office is due to expire. Tomasz Trzósło is expected to assume his role in May 2020. The appointment is subject to approval by the general meeting of shareholders. Tomasz […]

Leave a Reply Your email address will not be published. Required fields are marked * I have read and accepted the Terms & Conditions * Save my name, email, and website in this browser for the next time I comment. Source: https://www.paddocks.co.za/paddocks-press-newsletter/paddocks-press-december-2019/