Why Woodmead is a top pick for Tech giants 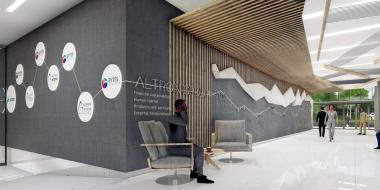 Woodmead is increasingly becoming a hotspot for technology companies. Altron will take up occupancy at The Woodland Office Park in November 2020

Home to many giants, Woodmead is increasingly becoming a hotspot for technology companies — SA Commercial Prop News has learned.

When people of Johannesburg’s northern suburbs think of the Woodmead area, most probably visualise shopping, commerce, business and perhaps even golf. Given the large numbers of office parks, retail outlets and golfing facilities in Woodmead, this would not be surprising.

The suburb has become a hotspot for technology companies. Other tech firms in the area include Huawei, Huge Group, Broadband Infraco, Ericsson, Accenture, SAP and Sage.

JSE-listed technology group Altron plans to move out of its staid corporate offices in Parktown to a new 29 000sqm campus in the area, being developed by Growthpoint Properties.

Altron will take up occupancy at The Woodland Office Park in November 2020 with the group’s nine operating companies under one roof.

The space is currently occupied by Deloitte which will leave the park at the end of March 2020 to make way for Altron.

Estienne de Klerk, CEO of Growthpoint, says, “we are pleased to sign a business of the high-calibre of Altron for The Woodlands and look forward to working closely with them. Growthpoint has secured a strong listed entity with a solid track record on a long lease, and accomplished this well before the Deloitte tenancy is up.”

Commenting on the move to a new campus encompassing all Altron’s businesses, Mteto Nyati, Altron Group Chief Executive, said: “our intention is to have a workplace that caters for our needs as the employer in creating an environment that promotes employee excellence through collaboration, creative thinking, visibility of leadership and the free flow of communication.”

Woodmead is best known for is golf and there is good reason for this. The Woodmead and Rocklands golf courses are among the finest in the country being ranked 9 and 59 in South Africa respectively. With their established tree-lined fairways they are today surrounded by secure estates on their western border and business parks in the north and south.